Prescriber Portal Login
Motor and Vocal Tics
Many kids experience tics in childhood, but a new onset of tics accompanied by other behavioral or psychiatric symptoms, such as ADHD or OCD, can be due to an underlying infection-triggered autoimmune response.
Learn More About Testing
Symptoms
Home
Obsessions and Compulsions
Motor and
Vocal Tics
Attention Deficit
and Hyperactivity
Autism Spectrum Disorders
Anxiety
Disorders
Seizures and Convulsions
Depression and Mood Changes
Chronic
Fatigue
Test Order
Process
Learn About The Cunningham Panel™
How To Order The Cunningham Panel™
Motor and Vocal Tics
Tic disorders, including Tourette’s syndrome (TS), are characterized by involuntary, abrupt, repetitive movements and/or vocal utterances. Motor tics (excessive eye blinking, eye rolls, facial grimaces, hand gestures) and vocal tics (coughing, throat clearing, spitting, grunting) can wax and wane over time. Tics, which typically surface between the ages of 4 and 6 1, often appear alongside symptoms of OCD and ADHD.
The exact cause of motor and vocal tics is unknown but genetics are believed to play a role. Certain toxins or drugs, brain trauma, alterations in neurotransmitter functioning and changes in certain regions of the brain, along with environmental factors, such as infections can also contribute to the sudden onset of tics.
Infections and sudden onset of tics in a child
Immune dysfunction and tic disorders in adults
Immune dysfunction and tic disorders in adults
Infections and sudden onset of tics in a child

Infections and sudden onset of tics in a child

Mounting evidence indicates that multiple types of infections (bacterial and viral) can trigger the sudden onset of tics in a child, adolescent or adult. Researchers believe that in some people, common infections trigger an abnormal immune response, which causes antibodies to attack healthy cells in the brain. This autoimmune attack on the brain can cause inflammation and the onset of neuropsychiatric symptoms, including tics.

According to the authors of one study, “Evidence points increasingly toward a role for infection and immune factors in at least a subset of [Tourette’s syndrome].” 2

Infections triggering motor and vocal tics is not new

The concept of infections triggering motor and vocal tics is not new. In 1929, a case series was published describing three boys who developed tics following surgery for sinusitis. 3 Since then, multiple infectious agents have been linked with tic disorders.

For example, Group A strep infections can cause a sudden onset of tics in a child or adolescent who is genetically susceptible. In these cases, the child’s tics may be the result of a treatable autoimmune disorder known as Pediatric Autoimmune Neuropsychiatric Disorders Associated with Strep infections (PANDAS).

“Youth and young adults with chronic tics and OCD may have underlying infectious/immunologic etiology.” (5)

PANDAS is characterized by an abrupt and sudden onset of tics and/or OCD in a child following an infection. It is not rare but often goes unrecognized by many clinicians. In fact, researchers estimate that at least 25% of children and adolescents diagnosed with obsessive-compulsive disorder (OCD) and tic disorders actually have PANDAS. 4

Making the distinction between a neurologic tic disorder and an infection-induced autoimmune disorder is important, since treatment differs for each.

Furthermore, individuals with chronic tics and/or OCD were found to have elevated levels of several antineuronal antibodies, which were detected using the the Cunningham Panel™. Elevated levels indicate that an infection-triggered autoimmune process may be causing a patient’s neuropsychiatric symptoms, such as tics. 5

A study co-authored by Dr. Madeleine Cunningham found a “significant correlation of streptococcal-associated tics and OCD with elevated anti-D1R and anti-Lysoganglioside antineuronal antibodies in serum concomitant with higher activation of CaMKII in human neuronal cells.” 5

Chronic tics and OCD may have underlying etiology

“Youth and young adults with chronic tics and OCD may have underlying infectious/immunologic etiology,” the authors concluded. 5

Researchers have also found that children who had multiple strep infections were at a greater risk of developing Tourette’s syndrome when compared to those who did not have repeated infections. 6

Watch Video: Study findings evaluating accuracy and sensitivity of the Cunningham Panel of tests for an infection-triggered autoimmune encephalopathy 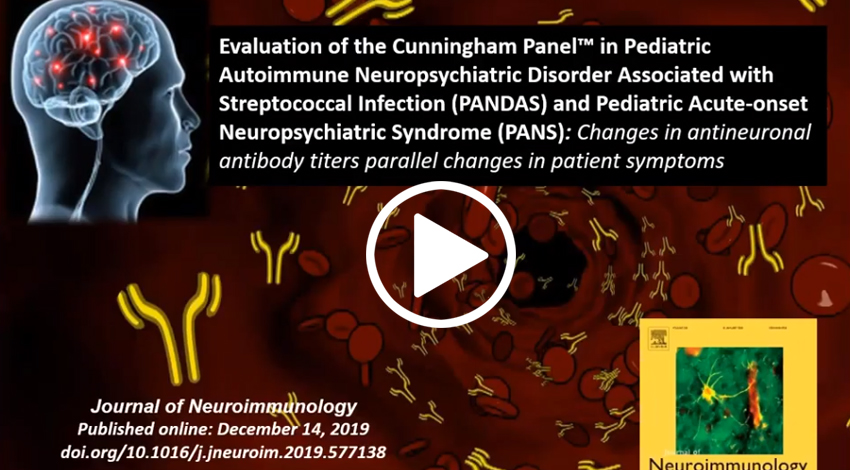 Other types of infections can trigger a sudden onset of tics in a child. Borrelia burgdorferi (the bacteria causing Lyme disease), mycoplasma pneumoniae, and herpes simplex virus are believed to play a role in the pathogenesis of tic disorders, such as Tourette’s syndrome. 7

Additionally, the enterovirus (EV) has been associated with a greater incidence of tic disorders. 8 “Our observations add to the growing body of literature implicating the immune-inflammatory process as relevant to the pathoetiology of some mental disorders,” reports Tsai and colleagues. 8

Infections, such as strep and mycoplasma pneumonia, may trigger an onset of tics.

The Cunningham Panel™ helped identify an underlying autoimmune disorder in a child initially diagnosed with schizophrenia.

Association between streptococcus pyogenes and tics/OCD