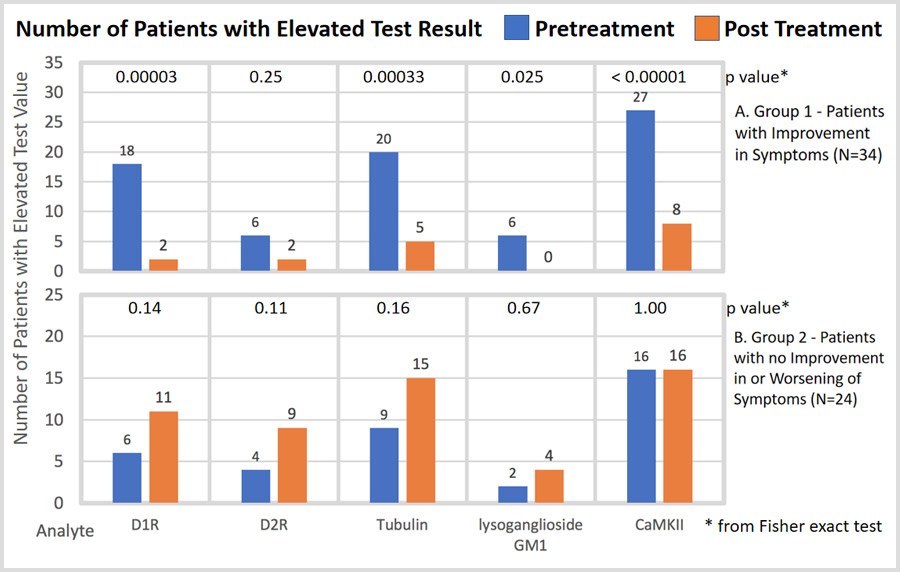 The authors examined whether changes in pre- and post-treatment symptoms correlated with anti-neuronal antibody titers and the neuronal cell stimulation assay measured by the Cunningham Panel™.

“This study revealed a strong positive association between changes in neuropsychiatric symptoms and changes in the level of antineuronal antibodies and antibody-mediated CaMKII human neuronal cell activation,” said Shimasaki.

Additionally, this study evaluated the Panel’s clinical performance for reproducibility and reliability. The authors also examined whether these assays might serve as biological evidence for monitoring treatment response in this patient population and assist in predicting effectiveness of antimicrobial and immunomodulatory therapy.

“These study findings support clinical utility of the antineuronal and cell-stimulatory assays comprising the Cunningham Panel™ as an aid in diagnosis, and laboratory evidence supporting an underlying autoimmune etiology,” 1 the authors concluded.

This video presentation reviews study evaluating accuracy and sensitivity of the Cunningham Panel for an infection-triggered autoimmune encephalopathy.

Data highlights value and reliability of Cunningham Panel in aiding diagnosis and treatment of autoimmune encephalopathy, characterized by neuropsychiatric symptoms.

To learn more about the Cunningham Panel™ and its utility in assisting with the diagnosis of an autoimmune encephalopathy characterized by neuropsychiatric symptoms, such as PANS/PANDAS, we have compiled a list of journal articles and video clips that may be helpful.

Learn more about how the Cunningham Panel™ can assist you in your diagnosis of treatable autoimmune encephalopathies characterized by abnormal neuropsychiatric behaviors. To schedule a personal phone consultation with a Moleculera Labs clinical staff member, please complete the form below.