Prescriber Portal Login
Obsessions and
Compulsions
Increasing evidence suggests that in a subset of patients, an abnormal immune response, often caused by an infection, can trigger obsessive compulsive behaviors that may be misdiagnosed as OCD.
Learn More About Testing
Symptoms
Home
Obsessions and Compulsions
Motor and
Vocal Tics
Attention Deficit
and Hyperactivity
Autism Spectrum Disorders
Anxiety
Disorders
Seizures and Convulsions
Depression and Mood Changes
Chronic
Fatigue
Test Order
Process
Learn About The Cunningham Panel™
How To Order The Cunningham Panel™
Infections and treatment resistant OCD
Can you develop OCD?
Can you develop OCD?
Infections and treatment resistant OCD

Obsessive compulsive symptoms are treated primarily with standard medications and psychotherapy. But studies indicate that these medications don’t work for 1 in 3 people with OCD. 1 Other studies report that 40 to 60% of patients with OCD do not show an adequate response to first-line treatments. 2

The outlook for children is just as sobering. Bloch et al. found that over 46% of children diagnosed with OCD did not achieve a remission. “Children with OCD symptoms that do not respond to evidence-based treatments are among the most challenging and difficult patients with OCD to treat.” 3

It is unknown why some patients with treatment resistant OCD don’t respond to standard medications. There may be multiple factors at play.

New research indicates that some patients with OCD, who do not respond to standard treatment or whose symptoms worsen with these medications, may have a form of autoimmune encephalitis, known as basal ganglia encephalitis, prompting their OCD-like behaviors.

Various infections, including strep, mycoplasma pneumonia and coxsackie virus, can trigger the immune system to produce antibodies that mistakenly target a specific region of the brain, leading to basal ganglia encephalitis.

Researchers have found that the risk of developing a mental disorder, particularly OCD and tic disorders, increased in individuals who had a positive strep test. (6)

Click to tweet
This dysfunctional autoimmune response can cause brain inflammation and trigger neurologic and psychiatric symptoms, including behaviors that mimic OCD. One study reports, “a strong relationship between brain inflammation and OCD, particularly in the parts of the brain known to function differently in OCD.” 4

Other infectious agents have been linked with obsessive compulsive behaviors. People with toxoplasmosis had 2.5 times higher odds of developing OCD, according to one study. 7 And herpes simplex virus, mycoplasma pneumoniae, measles, chicken pox, cytomegalovirus, mumps 8 and Borrelia burgdorferi, the bacteria which causes Lyme disease 9 have all been associated with the onset of OCD-like symptoms.

Study shows a “strong relationship between brain inflammation and OCD…” 8 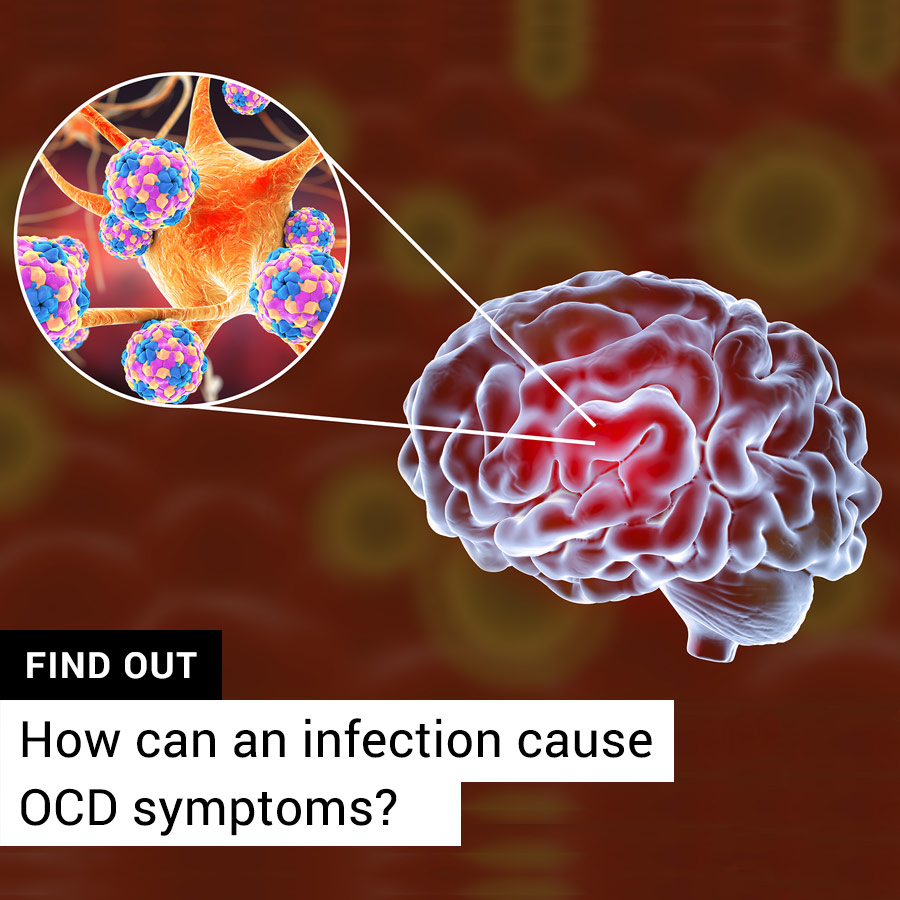